Welcome to Fundamental Magick. Here you will find curated collections designed to help you live your modern, magickal life with more joy, purpose, and empowerment. 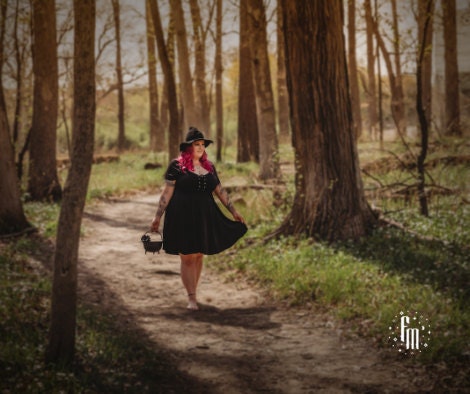 Season of the Witch

These are some of the names this mysterious and other-worldly night is known as. While most of us know about the modern celebration of Halloween, trick-or-treats, ghost stories, and pumpkin everything - what about its ancient pagan roots?

While there is some debate about just how far back the Celtic pagan tradition of Samhain (a Gaelic word pronounced "SAH-win") goes (some say as far back as the Druids), one thing that is generally agreed upon is that it predates Christianity's arrival on the shores of Ireland.

The ancient celebration of Samhain marked the end of the harvest and the beginning of the "dark half" of the year. It was also thought that during this time the veil between the world of living and the realm of the dead became thin, and those that had passed on could once again roam the Earthly plane.

Throughout the middle ages and beyond, the holiday has morphed and adapted itself to an ever changing world. Many of the traditions we see today are merely the current version of much older traditions; carved pumpkins were once turnips; trick-or-treating is said to come from mumming, the Irish practice of putting on costumes and going door-to-door signing songs of the dead; and cakes were given out as payment.

But, how have Witches become associated with this time of year?

Traditionally, those who became thought of as Witches were mostly women who created herbal remedies, carried with them wisdom about the world and how it worked, and were often sought out by people that needed assistance for a variety of problems.

Christianity is a mono-theist religion and its followers believe that all things come from this one source. As Christianity began to spread throughout Europe, those who did anything that fell outside the teachings of the church were thought to be "of the devil". So, wise women - and men - were seen as being heretical devil worshipers--thus a threat to the church and its followers.

This hysteria made its way to newly colonized North America, and many innocent people were murdered for being "witches" (they weren't - despite what a t-shirt or mug may say). After the witch-trials, stories and legends began to form and eventually became part of American folklore.When mass waves of Irish immigrants began arriving in North America during the Irish Potato Famine (1845-1852), they brought with them their Samhain traditions, which became woven together with the existing folklore.

Over the decades, a holiday that resembles what we now know as Halloween started to take shape. And this new holiday includes many aspects of the old world and the new...and Witches were, and still are, part of that mix.

As Witchcraft has gained recognition and momentum in pop-culture (a lot has to do with feminist movements and the Witch as an icon of female power), many modern Witches embrace the association between themselves and Autumn season. It's become a fun and empowering time for Witches to be conspicuous and to be celebrated by the culture at large.

How do you celebrate your Witchiness during the Samhain season?

Fly over to the shop and get yourself a limited edition Samhain candle!